Painting or Photography or Both?

I’ve worked a lot in both painting and photography. I don’t prefer one over the other, although I am mainly painting right now. I do love photography though. I love taking an image out of time and saving it. I now use my photographs in my paintings and drawings in various ways. Sometimes I’ll paint what I shot with perhaps making a few changes as I see fit. I shot the photograph below, Hope in Belgrade, a few years after the end of their terrible war. I chose to paint the image so that I could more clearly communicate the positive changes I saw in Belgrade. I posted the painting just below the photo. You’ll see that I added a gold street and a brightly colored sky of red sunbeams that also refer back to their recent communist past.

While visiting a friend in Marseille, France, I was lucky enough to get to go to Le Corbusier’s Cité Radieuse (radiant city). This building has apartments but also many things you’d find in the city, like a market, a hairdresser, an architect and a post office. I took the official tour of the radiant city. I was the only person on the tour and the guide could not speak English and I do not speak French –except for the essentials like baguette. The very nice tour guide decided to give me the keys to the apartments and allowed me to go alone shooting and experiencing Le Corbusier’s fantastic creation. I shot the photo below while I was standing right across from the market. I really like this shot. I sat in front of that window looking though it and sipping espresso for quite a long time. I painted it so that I could give it life outside of the slide I’d shot.

Using My Photos in my Digital Images

I’ve also used my photos in my digital images. I don't make digital images all that often but here are two: The red poster below is an advertisement I made for a presentation that I made of a photo documentary of mine. The black and white image of the teenage girl and the building in the background are portions of two different photos that I shot. The movie poster under the red poster, I made when I was new to Photoshop and experimenting. The movie does not exist. I made it up. If you look in the background behind the women, who I drew on paper and then scanned in, you’ll see a photo I shot of buildings. I am really attracted to the coupling of photographic and drawn or painted imagery. For me, it is a way to breathe more life –or a different kind of life, into a photo.

Using Photography, Paint and Drawing Equally to Create an Artwork

In figuring out a way to communicate the way that the refugees who I befriended in Serbia held their lives together during and after the horrible war, I made the piece below. I took a few shots of the skeleton of a building that we passed everyday walking to the refugee camp from the public transportation station. I worked with the photos in a few different ways –printing them as double negatives, writing on them, scratching on them –nothing felt right to me until I sewed together the photo of the left side of the building to the photo of the right side of the building to show how the refugees had been damaged but were able to sort of sew themselves back together. I adhered the sewn together photos to a wooden panel and painted and drew onto it to sully up the images since war is in no way clean.

*a post will be up before too much longer about my experience with the refugees.

Finally, the piece below I constructed using photos and fishing line. I didn't paint or draw onto this piece. I collaborated with another woman, Angela Griffin, in making it. The piece deals with our personal vision of ourselves and how we are creating our own image by basically collaging what we think is needed, or right, onto our own bodies. 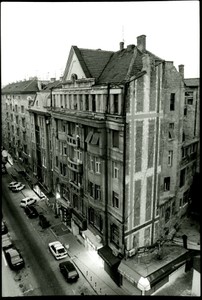 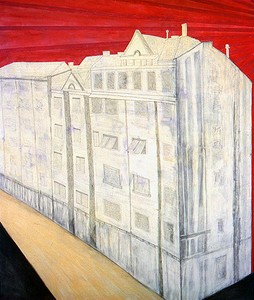 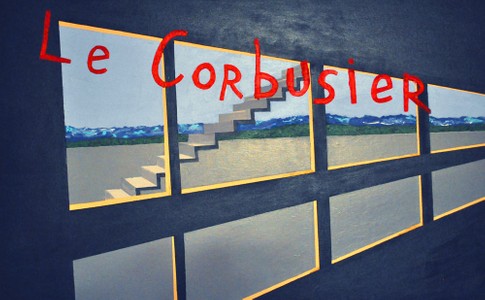 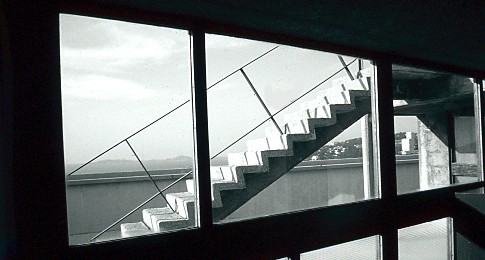 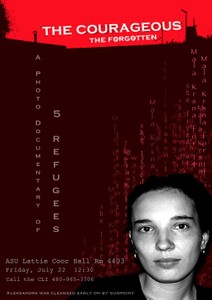 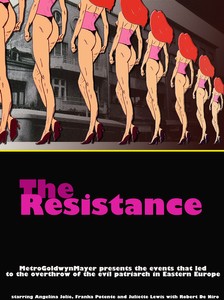 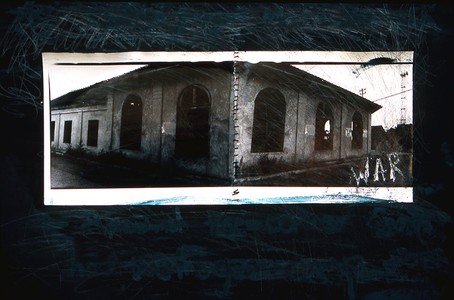 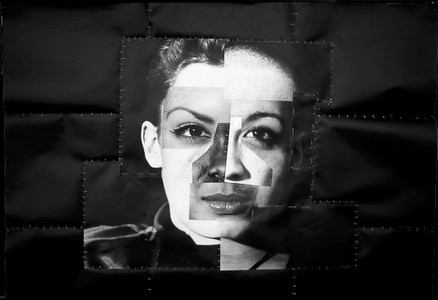